LTTA –C3 was held in Recklinghausen, Germany from 3 to 7 October 2016. Wolfgang-Borchert Gesamtschule hosted 10 pupils from the Netherlands and their two teachers, 10 pupils from Croatia and their 2 teachers, 10 pupils from Spain and their 2 teachers as well as 2 pupils from Denmark and one teacher. The pupils from Croatia and Spain stayed in host families, the students from the Netherlands and Denmark stayed in a hostel. The participating pupils were selected by motivation letters where they expressed their interest in science.
The name of the project activity was “Advanced Science Project”. The project started with Highland Games, to let the pupils get to know each other. First, a lesson was held by teachers to activate the knowledge of chemistry and later the pupils visited the University of Bochum and participated in the workshop “Vanilla or Vanillin” of the Student Laboratory.
The pupils worked together in teams of all the nationalities to develop lesson plans for younger pupils at a primary school. They presented their lessons in English to the pupils from the primary school class of the Wolfgang-Borchert Gesamtschule.
The lessons covered following topics:

For our pupils it was a wonderful opportunity to work together with all the different nationalities. Making lesson plans and trying to find ways to teach to younger pupils was also a challenge, but they worked hard and with a lot of enthusiasm. The results in the end were great and the primary school teachers were really impressed.
The younger pupils showed a great pleasure to have the opportunity to be taught by older pupils. They especially liked the activities the older pupils used to teach them. They were interested in participating in exchange programs and similar projects in the future. 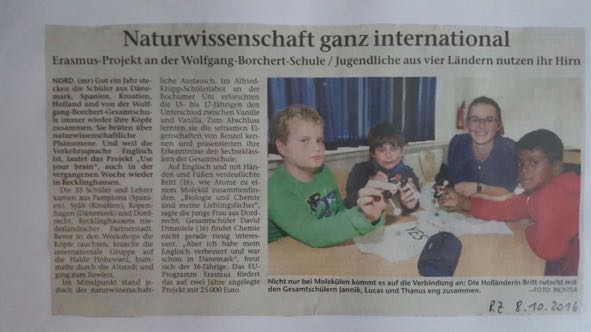